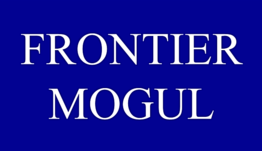 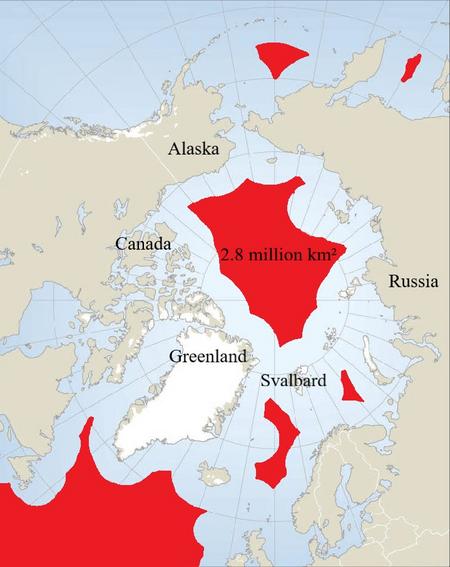 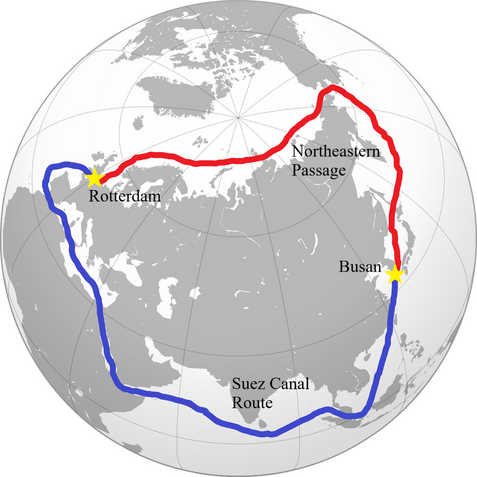 At first glance it looks like there’s approx. 2.8 million km² (the Mediterranean Sea is 2.5 million km²) of international waters in which anyone can fish. It is not so simple.

Much of it is covered in ice. More complicatedly, international access does not follow normal international rules related to territorial waters. An international treaty is now active, signed by the most realistically relevant countries, banning fishing in Arctic international waters until 2034 (PR 04-Mar-2019). On the other hand, drawing up boundaries and rules about fishing rights are supposed to be exclusively governed by the Arctic Council.

The international commercial opportunities are enormous and transformative.

More so than any other country, this is also true for Russia domestically.

Russia has by far the most territory and exposure to the Arctic.

As the NEP becomes one of the world’s busiest shipping routes, it will lie almost entirely in Russian waters. Murmansk, the largest, and really the only, city in the Arctic Circle will be the only realistic port and refuelling place. This could also be important for shipbuilding, tourist cruises, as a regional scientific research centre, and for disaster recovery. If more people go to the Arctic, that will mean higher demand for a wide range of goods, services, and support. The Russian government is designating Murmansk a prioritised development zone (Barents Observer 15-May-2020).

Arktikugol, the Russian SOE, still keeps coal mines on Svalbard while Norway decommissioned their operations. Oil, for now, is not cost effective in the Arctic while prices are low. LNG is much more promising. As mentioned above, China and Russia are cooperating on a project on the Yamal Peninsula. If international sanctions continue on Russia, this makes the Arctic much more attractive, and could make Russia rely more on China and its own internal potential.

Most of Russia is very difficult to access. Presently, the Trans-Siberian and Baikal-Amur train lines go across the south of Russia, closer to Kazakhstan, Mongolia, and China. Roads across the Urals, Siberia, and East Asian regions are minimal. Cities like Norilsk, a mining centre with a 200,000 population, are completely inaccessible except by plane and boat. A more open Arctic means that much more Russian land becomes accessible.

Russia’s fleet of nuclear icebreaker ships are getting old, but newer ships are either under construction, recently entered service, or are due soon (High North News 22-Dec-2020). Just as the ice is receding in the Arctic, the news ships will be able to break the ice in the 4 major rivers and estuaries which flow from Russia into the Arctic.

Accessibility by sea also makes new railways much more commercially attractive. There are revived plans for a Trans-Polar Railway (Barents Observer 26-Apr-2019), which date back to Stalin. This line would run latitudinally. There are other proposals for longitudinal railways running south from Murmansk, and from the Yamal Peninsula down to the Trans Siberian Railway. The most ambitious plan in the furthest east of Russia would cross the Bering Strait, joining with Alaska (Siberian Times 23-Mar-2015).

The icebreakers are just the start (haha). Building a nuclear-powered fleet serves other purposes. It will deliver electricity across northern Russia.

Russia’s first floating nuclear power plant came, the Akademik Lomonosov, came online just over 2 years ago (WNN 19-Dec-2019). The plan is to use the electricity for mineral exploration and extraction. It may be possible to avoid ice and weather conditions altogether. The Malakhit Design Bureau has plans for nuclear-powered submarine LNG tankers (Strana Rosatom 16-Dec-2019).

The Arctic will make the world, and Russia in particular, richer. It will also make Russia stronger. All of this in turn will attract more international defence attention.

Russia has feared land invasion from the north since 1918. Attempting to push Russia back into WW1, and to dislodge the Bolsheviks, the remaining western forces landed at Murmansk, and later Arkhangelsk. Russia now has divisions of infantry, tanks, planes, missiles, and the Northern Fleet, dedicated to its defence.

Russia has the single strongest military presence in the Arctic. Almost all the NEP is within its territorial waters. Every other full member of the Arctic Council is either a NATO ally or western-aligned.

At a time when Russia is under financial pressure, it is spending resources rebuilding military capacity in the Arctic. This serves a number of important purposes.

Control over such an important world shipping route turns attention on Russia, but this control also gives it an opportunity to wield influence for its own advantage, and beyond its relative strength. Countries like Iran and Malaysia sit at major world crossroads. The British still keep Gibraltar at the Atlantic mouth of the Mediterranean.

It is also much easier to deploy the military for disaster recovery, search and rescue, maintaining outposts, and scientific research. There will be more people in need of more emergency services as the Arctic opens up for mining, tourism, habitation, fishing, etc. The Russian military is well trained and equipped to deal with terrible cold. It’s much more convenient and cost effective to use the military instead of training and equipping new and inexperienced civilians.

Unfortunately for the NATO allies, this presents a risk. Svalbard is Norwegian territory. However, according to the Svalbard Treaty signed in the 1920s, anyone can visit without a visa and live there. The clauses related to mining says that citizens of every country running mining operations have a right to be there. Arktikugol, the Russian SOE, still mines coal. Russians are the largest ethnic group in Svalbard at approx. 15%, or 400 people out of 2,600. The Svalbard Treaty also designates it as demilitarised and it is forbidden to establish military bases there. But what happens if there is some kind of emergency and the Russian military is the best choice to respond? Russia has also used the excuse of protecting Russians to annex Crimea.

Russia is building its confidence in the Arctic. In 2012 it amended its laws on shipping to demand notification from foreign war ships planning to sail that route. This hasn’t been tested but it is not entirely without precedent. Two US Coast Guard icebreakers, the Edisto and the Eastwind, in 1967 tried to sail through the Vilkitsky Strait. They were met by Soviet destroyers and turned around.

Russia is very likely to meet any challenge to its authority over the NEP. The US has probably run some training scenarios. One risk is sailing further into international waters in the Arctic Ocean and damaging ships. The other is sailing much closer to Russian territory and provoking it. If the US says that Canada allows warships in its waters along the NWP, what happens when Russia, or someone else, sails some warships through there?

If the Cold War ever turned hot, the theory was that the UK could plug the Northern Fleet in the north Atlantic around Norway, before it could get out further. Today, the US 2nd and 6th fleets could join the Royal Navy. The north Atlantic is realistically as far as these ships could go, certainly outside of summer. Only the Russian Northern Fleet’s ships have hulls thick enough to sail in icy waters. Even if the US and UK ships had thick hulls, that might not be enough. Most of the US and UK’s military attention has been focused on the Middle East for the last 20 years. Do the US and UK have enough training and experience in the challenges of cold water operations?

The Kola Peninsula isn’t only home to the Northern Fleet. It’s home to a lot of Russian nuclear firepower. The Arctic is a closer base for missiles to reach the US mainland. Today, the problem is worse for the US. Skyfall technology means that nuclear-powered missiles can stay in the air indefinitely (Diplomat 02-Mar-2018), capable of launching from the Arctic and reaching Hawaii (Russia 24 01-Mar-2018). Hypersonic speed (TASS 09-Feb-2021) means that missiles can move faster and less predictably in air rather than space like ICBMs.

Ships, and particularly aircraft carriers, might be at very high risk. Hypersonic missiles could seriously damage ships with their speed and mass alone, nevermind adding a powerful warhead.

Some speculate that China is the world leader in hypersonic missile technology. This makes it a contender in the Arctic. Its scientific research outposts in the Arctic Circle are good for its soft power...but what comes next? It does consider itself, after all, a “Near-Arctic State”. It also has a strong interest in securing an alternative shipping route away from US allies around the South China Sea.

What is north of the North Pole? What’s next?

There are 3 major world powers with strong and differing interests in the Arctic. Location, location, location. For now, and for the next few decades, only Russia is able to support operations in and control the Arctic. If ships want to sail the NEP, they will have to go undefended. Russia and China have the strongest commercial and defence incentives for Arctic ice to melt. Perhaps the US has an even stronger incentive if it means the NWP becomes viable sooner.

The Arctic presents a lot of opportunities and risks. Just remember, the Arctic’s most famous resident is making a list and checking it twice.

The Arctic’s commercial, military, and scientific importance is growing quickly.

It is a rich source of oil, natural gas, minerals, and fish. The Northeast and Northwest Passages are much shorter, alternative shipping routes. Accessibility by sea opens access to Siberia. Melting permafrost could expose us to old microbes and cause new pandemics. New technology threatens US naval hegemony. Melting ice caps threaten rising sea levels. It could even become an attractive tourist destination.

After the USSR ended, the Arctic Council was created in 1996. It included the 8 nations with land and sea territories in the Arctic Circle, the “Arctic States”. Over the years it expanded observer membership to 13 “Non-Arctic States”. The most notable nations are NATO allies, Russia, and China.

The Arctic is opening. This will change the course of history.

Arctic sea ice is melting at a rate of approx. 13.1% per decade (NASA 08-Feb-2021). Approximately a third of its traditional surface is gone.

This is particularly important for shipping. There are two routes: the Northeast and Northwest Passages (NEP & NWP).

The NWP follows the coasts of Alaska, Canada, and then south of Greenland. The route is still mostly unnavigable, even during summer months. There is too much ice and shipping is mostly impossible or unacceptably dangerous. Ice regression models generally predict that the NWP is many years away from becoming viable.

The NEP follows the northern Russian coast and Norway. In the summer months it is open. The Russian LNG carrier, the Christophe de Margerie, completed the first ever NEP winter voyage between Sabetta and Jiangsu (Bloomberg 22-Feb 2021). Cargo volumes increased from approx. 1.36m tons in 2013 (Arctic Institute 13-Jan-2014) and the 2020 est. is 32m tons  (Rosatom 22-Dec-2020). Much of the cargo is minerals, oil, and gas, but this will diversify and grow.

The NEP will become as important to shipping as the Suez and Panama Canals.

China is taking a particularly strong interest in the Arctic.

China’s Arctic Policy (State Council Jan-2018) self-classifies the country as a “Near-Arctic State” and explains its ambitions to tie the Arctic into its Belt and Road Initiative (BRI). This is bold and certainly a bit of a stretch. Its closest territory to the Arctic Circle is 1,450km away, about the same distance as Germany.

Many other countries are also interested in the resource potential of the Arctic. It’s already a known source of phosphate, bauxite, iron ore, copper, zinc, nickel, palladium, platinum, rhodium, cobalt, gold, and diamonds, mostly on land in northern Russia, Canada, Alaska, and Svalbard.